A blast from the past for those who are “smarter than the smarties, and tougher than the toughies”… 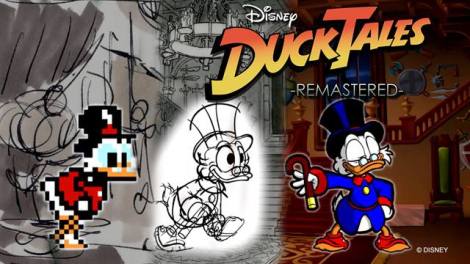 “Life is like a hurricane”… you’re telling me! Twenty-three years have whirled by since DuckTales‘ 1989 video game debut. In that time the Capcom platformer has come to be revered as an 8-bit legend, and for me personally is one of the most nostalgia-inducing NES titles of all time. It’s a testament to the Disney adventure’s influence on younger gamers that developer WayForward Technologies – largely comprised of those who played the original as kids – felt passionate enough to facilitate its well-deserved modernisation.

The fruit of their labour – DuckTales: Remastered – provides long term fans with a welcome excuse to relive their youth, while simultaneously repackaging an old-school classic for a modern era. However the question remains, does this reincarnation reflect the retro magic of its predecessor, or is it simply a dead duck, too archaic to appeal to a contemporary audience?

WayForward’s re-imagining recounts the adventures of Scrooge McDuck, the richest fowl in the world. Always on the lookout for opportunities to expand his considerable wealth, he sets off in search of five mythical treasures to add to his collection. Many fan-favourite characters from the animated series make their return including nephews Huey, Dewey, and Louie, dim-witted pilot Launchpad McQuack and of course, Mrs Beakley; all of whom are expertly voiced by the show’s surviving cast.

To read the rest of the article visit GamesGrin.

One response to “Ducktales: Remastered Review”