With the first major release of the year fast approaching, it’s time to give the devil his due…

Prolific Japanese publisher Capcom introduced the original Devil May Cry in the Autumn of 2001. A visceral hack and slash action game, it told the story of Dante, a roguish mercenary specialising in paranormal phenomenon, waging war against demonkind to avenge the death of his Mother. Due to his own half-demon heritage he possessed heightened strength and speed, as well as enhanced regenerative abilities, which combined with his proficiency with both blades and firearms made him a formidable foe against the forces of evil.

After that little was heard about the franchise for some time, but in September of 2010 at the Tokyo Game Show a controversial DmC series reboot was announced. Developed by Cambridge-based studio Ninja Theory, best known for Heavenly Sword and Enslaved: An Odyssey to the West, the re-imagining featured an entirely new, younger-looking Dante. Lets just say that this wasn’t exactly received too well by longterm series fans… that is to say; it was about as welcome as a blue shell up your tailpipe on the last lap of Rainbow Road! However after the initial backlash died down, indignation and apprehension seemed to give way to excitement and anticipation. And last year’s Devil May Cry HD Collection only did more to whet gamer’s appetites for another dose of crazy, stylish demon-hunting action.

This new DmC is set in a parallel universe to that of its predecessors and thus its story is not a continuation of the original series. Its setting is that of Limbo City, a modern metropolis secretly controlled by sinister demonic forces, who manipulate humanity to their own vile ends. Enter Dante, a disenfranchised youth living on the outskirts of society, constantly hunted by vicious beasts that transform his life into a waking nightmare. During his travels he is contacted by a mysterious organisation known as The Order, led by his long-lost brother Virgil, who wishes to expose the demon threat to the general populous and rid the city of their foul presence. By joining them in their crusade Dante will learn of his hidden past and the family he never knew, whilst coming to terms with the awesome powers that derive from being a Nephilim (half angel and half demon). 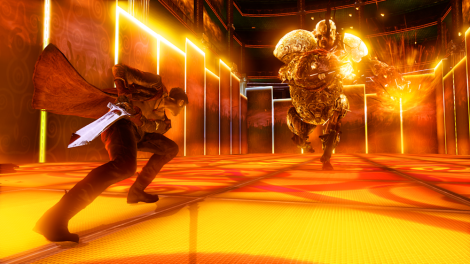 Although aesthetically DmC has changed extensively, its gameplay remains true to its roots. Players must utilise Dante’s arsenal of weaponry and supernatural abilities to slice, smash and blast their way through hoards of malevolent foes and navigate the treacherous urban jungle of Limbo. Combat is at the centre of the experience; players perform long, stylish combos whilst dodging incoming attacks to build up high scores. Returning in a much more accessible form, the style rankings system allows players to accurately gauge how effective their barrage of attacks are in attaining the elusive triple-S ranking. Variety is the key to success, encouraging players to utilise Dante’s whole skillet, as oppose to relying on the same old moves over and over again.

As well as his staple weapons – his sword, Rebellion, and duel pistols, Ebony and Ivory – Dante can use his unique lineage to access both Angel and Demon modes. The first of these transforms Rebellion into Osiris, a speedy scythe and allows him to grapple enemies and objects and catapult himself towards them. The latter of the two changes his blade into the slower but more powerful Arbiter, a heavy axe, and gives him the ability to yank his assailants towards him. A slew of other angelic and demonic armaments can be unlocked as well as several other firearms, all of which are upgradable. By combining sword, gun, angel and demon attacks, players can create huge, beautiful, flowing combos to deal out death and net the most points. 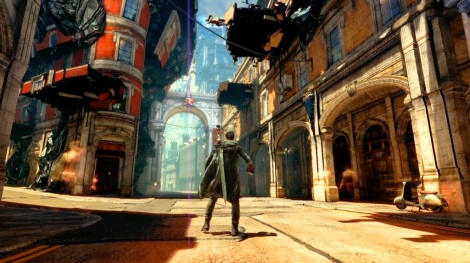 As in previous titles, souls are used as a form of currency. They can be collected to recover health, purchase items and upgrade Dante’s moves. When enough power has been amassed, Devil Trigger mode can be activated. This slows down time, allowing the player to perform faster, more devastating manoeuvres than ever to dispatch the brutal onslaught.

Interestingly one of Dante’s most formidable adversaries is the city of Limbo itself. When he is set upon by fiendish creatures the world twists and contorts into a grotesque, monstrous parody of its former self as he’s sucked into the demon’s realm. In this dimension the distorted environment actively attempts to pursue and destroy the player. Roads crumble and collapse into nothingness and alleyways slam shut to prevent escape. This fascinating metamorphosis promises to be an exciting change from the inert, desolate landscapes of previous DmC titles.

I’ll be honest, I’ve never been a huge fan of Devil May Cry. I played the original when it came out over a decade ago and quite enjoyed it, but didn’t return to the series until the fourth entry, which I wasn’t overly impressed with. Some people absolutely love the franchise but I’m not sure I quite understand the appeal. Possibly hack n’ slash action games just aren’t my cup of tea, and while they’re still fun, it’s rare that I ever get overly excited about them.

Now, to play devil’s advocate for a second; the impending reboot of the franchise is the perfect time for players to jump onboard with DmC. Newer gamers can start fresh without the need to go back and play its predecessors, and longterm fans of the series get to experience a brand new take on the characters and insane action they know and love. So if you are a fan of games like Bayonetta or God of War, you might consider picking this one up, or at least playing the demo. Despite my reservations, if it reviews well I will almost certainly be checking out DmC upon its release; granted probably when its price drops. And who knows? With any luck it might begin to change my mind about the series and maybe even the genre as a whole… but if it does suck – there’s no use Devil May Crying over spilt milk.