A Nintendo Theme Park…? With no queues…? Count me in!

Nintendo Land is the Wii U’s pack-in game and in much the same way as Wii Sports before it, is intended to subtly demonstrate the functionality of the Big N’s new hardware, whilst simultaneously delivering a fun and engaging experience for all ages. Set in a fictional Nintendo-based theme park, the game is made up of twelve separate mini games, or “Attractions”, based on various Nintendo franchises. Many of these mini games support up to five players, four using Wii Remotes and Nunchucks and the fifth using the new Wii U Gamepad. These attractions showcase what Nintendo refers to as “Asymmetric Gameplay”; where players have different experiences depending on which controller scheme they use.

Team-Based Attractions (1-5 Players):
The Legend of Zelda: Battle Quest attraction takes place in a Zelda-based world made entirely out of different fabrics, with players taking the form of Miis dressed as Link. Players using Wii Remotes use their swords to fight through a plethora of monsters and the player utilising the Gamepad provides backup, using it as a bow and arrow. Characters movement is on-rails and health is shared between all players, so if one person is hit everyone loses a heart. The game has nine levels and each stage is completed by your party successfully making it to the end intact.

Metroid Blast is based on the popular Metroid series, and dresses player’s Miis up in Samus-themed outfits. It involves the player using the Gamepad piloting Samus’s gunship, while players using Wii Remotes fight on foot, using laser guns in a space-themed arena. A hookshot can also be employed to quickly travel across the map and even grapple onto the bottom of the gunship to shoot from above. Players can either work together to eliminate an AI controlled enemy force in a Horde Mode, or they can play in For-For-All and Team Modes, the latter of which involves the player flying the gunship vs. the players who are on foot in a battle to the death.

Lastly there’s Pikimin Adventure, based on Shigeru Miyamoto’s Pikimin series. The player making use of the Wii U Gamepad controls Captain Olimar, who has the ability to wield a swarm of tiny Pikimin. Players using Wii Remotes take the form of large, differently-coloured Pikimin. Participants must co-operate to navigate levels and defeat enemies, which relinquish drops of nectar upon their demise, allowing Pikimin players to level up and deal more damage. A boss is included at the end of each stage. The player controlling Olimar can summon Pikimin players to him and hurl them into battle using the Gamepad’s touch screen. Once defeated, the players board Olimar’s space ship and blast off to the next zone.

Competitive Attractions (2-5 Players):
Based on the Super Mario series, the Mario Chase attraction is set in the Mushroom Kingdom. The Miis of players using Wii Remotes are dressed as Toads and have to give chase to the player operating the Gamepad, who’s Mii is adorned in Mario’s apparel. The Gamepad displays an overhead map of the area, including the real-time locations of the other players, helping its wielder to remain elusive. While the other players don’t have a mini-map, each seeker has an indicator showing roughly how far away the runner is from their position. If there’s a shortage of Toads in a game, AI controlled Yoshi Karts are introduced into environments, which help to hunt the fleeing Mario down. If the player using the gamepad evades his pursuers until the timer counts down he wins and if the others manage to catch him they’re victorious.

Luigi’s Mansion was a launch title for the Nintendo Gamecube. Luigi’s Ghost Mansion is based upon it, dressing players using Wii Remotes up as Mario, Luigi, Wario and Waluigi respectively and placing them into a spooky haunted house. The player using the Wii U Gamepad plays as a ghost who is invisible to the others. It’s his job to covertly eliminate all the other players as they attempt to hunt him down by shining their flashlights at him. If the ghost manages to take out a player they can be revived by their team mates by being illuminated by their torches. Unfortunately flashlights don’t have unlimited power and players will need to locate and grab batteries dotted around the environment to recharge them. If the ghost is hit by a beam of light he becomes visible to all players on the map and if he’s hit enough then he fizzles away and the other players win. 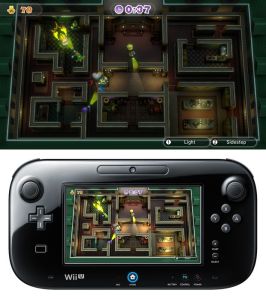 Animal Crossing, first seen outside Japan on the Nintendo Gamecube is the basis for Animal Crossing: Sweet Day. Players using Wii Remotes are dressed as animals, who’s job it is to gather as many sweets as they can from the candy orchard. The player using the Wii U Gamepad simultaneously controls two guards using the two analogue sticks. He is tasked with catching the other players, forcing them to drop their loot. The more candy players collect the bigger their heads get, weighing them down, making them easier to snare. Players can toss their swag away in order to make a quicker getaway but of course their score will suffer. The sweet swipers have a collective amount of health and if they’re caught by the guards enough times they lose the match.

Solo Attractions (1 Player Only):
Takamaru’s Ninja Castle is based on the 1986 Famicom game, Nazo no Murasame Jō. The player lays the Gamepad horizontally and uses the touch screen to launch shrunken at an ever-growing army of hostile ninjas on the TV screen. The controller can be tilted to alter the trajectory of throws and increasing the speed with which the player swipes the touch pad boosts both the velocity and distance of ninja stars. Enemies attack you with weapons such as knives and bombs and stages have their own bosses, which are fought using a sword. Hitting consecutive foes, and adversaries in the distance nets the player the highest score but if hit with enough projectiles from assailants the game is over.

The original 1981 arcade classic, Donkey Kong, is the inspiration for Nintendo Land’s Donkey Kong Crash Course. Using the Gamepad players guide a fragile kart through an elaborate course with the gyroscope by tilting left and right. Along the way there are multiple tricks and traps that players are required to clear using the analogue sticks and the L&R buttons such as lifts, ramps and jumps. If the player is about to crash they can tap the Y button to respawn at the last checkpoint without losing a life. The aim of the attraction is to complete the level as fast as possible whilst collecting bananas, which gain you points in order to net high scores. Players have a certain amount of lives and if they crash enough times then it’s game over.

F-Zero, one of Nintendo’s much revered, classic franchises is the basis for Captain Falcon’s Twister Race. Another game employing the Gamepad’s gyroscope, players control their vehicle by tilting the controller left and right. Rather than race against opponents the goal is simply to survive the dangerous track, or at least get as far as possible without dying. Players looks at the screen to steer their craft, while a mini map is displayed on the Gamepad allowing the driver to pre-empt the twists, turns and obstacles up ahead. Going through tunnels renders the minimap inoperative so players have to rely on their quick reactions in order not to crash. Previous attempts of the track are displayed in ghost form, allowing players to gauge their performances and improve upon them. Once the track is complete scores can be uploaded to competitive leaderboards.

The obscure NES title Balloon Fight is the inspiration for Nintendo Land’s Balloon Trip Breeze. Using the stylus on the Gamepad touch screen, players swipe to create gusts of wind, guiding their Mii who is floating tied to several balloons through a variety of ariel obstacles. While the pad itself shows a close up view of the immediate area your character is in, the TV has a zoomed out picture, allowing the player to judge the best route to take. Unusually scrolling from right to left, the aim of the game is to guide your character as far as possible without him meeting a sticky end. On getting too close to the water a giant fish will leap out and attempt the swallow the balloon pilot whole. Along the way there are collectables to grab and objects can be removed from your path with a quick jab of the stylus. Periodically there are islands, which act as checkpoints. If the player manages to accurately land on their pedestals they will collect more points.

Yoshi’s Fruit Kart is a brain-teasing challenge that tasks the player with guiding Yoshi’s kart towards the exit, whilst collecting all the pieces of fruit along the way. The door will only unlock once all necessary items are collected on the map. Yoshi is guided by players drawing a line on the Gamepad’s touchscreen using the stylus. Although the TV screen displays the map, fruit and door, the Gamepad only shows the start and exit points. This requires players to accurately judge a path in order to grab the fruit, while avoiding hazards to open up the exit. There are around 50 levels that scale in difficulty as you progress, providing a significant challenge to players. Once completed levels can be replayed from the menu. 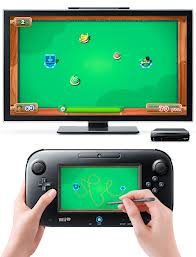 Octopus Dance is a rhythm-based attraction, based on 1981s Game & Watch: Octopus, played once again using the Wii U Gamepad. The player must quickly memorise the actions of the onscreen deep-sea diver and re-enact their poses using the gyroscope or the control sticks. The game will then rate your performance with Ok, Good or Perfect medals, with top scores being earned by keeping movements in time with the rhythm. If you make mistakes you lose hearts and losing enough will result in a game over. The game is won by successfully getting through the entire level without losing all of your health.

As I mentioned in my preview for New Super Mario Bros U, I have already pre-ordered my Wii U and this is one of the two games I’m purchasing at launch. Not only does it show off what the new system is capable of but it looks like a whole lot of fun. And with Xmas coming up, this kind of party game will be the perfect title to get everyone playing, laughing and having a good time.

Here’s a Nintendo Land drinking game you can try! Just don’t blame me if you get slightly… decimated. Buy four different bottles of spirits. After each mini game everyone has a shot. The winner is rewarded with something tasty. The participants in second and third place get something slightly less appetising. The competitor in fourth place is given something that’s pretty gross and finally the loser is punished with something that tastes like jet fuel. I guarantee you, you will play harder than you’ve ever played before to avoid coming last. Never has a dumb party game meant so much and got so competitive. Enjoy… and err, drink responsibly kids…

Nintendo Land is released on 30th November exclusively on the Wii U.