Danish studio IO Interactive’s stealth series has been largely absent over this console generation, with the last game in the franchise, Hitman: Blood Money, coming out in 2006. This November marks the release of the fifth game of the franchise, Hitman Absolution, which will be running on IO’s proprietary Glacier 2 engine. This next-gen ready engine is the reason for the half-decade delay between titles and was developed simultaneously with Absolution to cater to IO’s specific needs, such as realtime level editing.

According to the developer, this new game will be far more accessible than previous titles, while still retaining its hardcore gameplay elements. It offers more choice, allowing players to tackle levels guns blazing if they wish, as well as by employing a more traditional subtle approach.

The plot centres once again around the sharply dressed, baldheaded assassin, Agent 47 and looks to be much more of a personal story than those told previously. The agency have put out a kill order on his handler, his only real human contact in the world, Diana Burnwood. So reluctantly he is forced to carry out the contract. Her dying wish is that he should find and protect a mysterious young orphan in Chicago named Victoria. 47 accepts the task and the ICA labels him a traitor, sending a group of assassins known as The Saints to take him down.

Gameplay in Absolution is in essence classic Hitman although it seems to be slightly more linear than previous titles. Still based around contracts, you enter an environment, locate and eliminate your target and stealthily make your way to an extraction point.

The first thing to note about Absolution in comparison to its predecessor is that levels are more focused and split up into several sections, which each have their own scores, objectives and challenges – encouraging replayability. This is a choice by IO to be able to pack as much detail into their environments as possible, with props, people and subtly choreographed events laced throughout the experience.

47 will visit a multitude of locations, ranging from abandoned libraries and raucous night clubs to a hippy commune on a marijuana farm. If you race through levels you will miss entire conversations, some darkly comical, like a guard who’s just been given the news over the phone that he’s clear of cancer – ironically right before you pull him out of the window to his death. Other dialogue is simply there to colour the world, like a young stripper confessing to a co-worker what the manager made her do behind closed doors. The dark humour synonymous with the Hitman franchise is definitely alive and well in this incarnation. 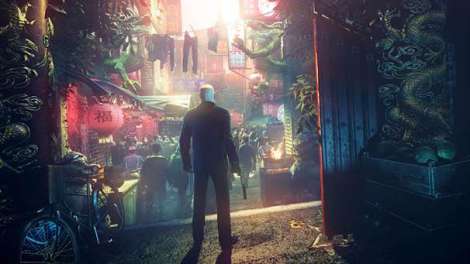 Like Blood Money, Absolution can support hundreds of detailed character models going about their business onscreen at once. This combined with the multitude of disguises that 47 can don, afford the player the ability to hide in plain sight.

Along with an overhauled HUD, Absolution introduces “Instinct Mode”, which shows the locations of non-playable characters and the routes they take in a style similar to Assassin’s Creed’s Eagle Vision or Batman Arkham City’s Detective Mode. It also gives ammeter players a nudge in the right direction by highlighting objects that can be interacted with, such as a poisonous fish in a Chinatown market that can be slipped into your target’s food – or a box of fireworks that can be set off, causing a distraction, allowing 47 to slip away unnoticed. Diehard fans will be pleased to hear that there is a Purist mode, where both the HUD and Instinct Mode are disabled, giving you a much tougher, more authentic Hitman experience.

Another new feature is Contract Mode. This allows players to record their high scores on competitive leaderboards and also set up their own missions, albeit utilising existing environments. The player enters a level as they would in single player, where they can tag up to three targets for assassination. Instead of programming mission permitters such as ‘kill this target with a knife’, the player actually carries out the actions themselves and the methods used sets up the in-game rules to complete the operation. If you employ disguises, disguises are allowed. If you stash a body after a hit, people who play the contract will be required to do the same. Contracts are only issued however if the player manages to complete the scenario themselves first, thus making sure it’s sufficiently tested before making it available for others online.

I’ve never played any Hitman titles before, which is surprising because I am a huge fan of stealth games. Regardless I’m very excited about the prospects of getting my hands on Absolution.

For a start the game looks stunning. IO’s new engine looks spectacular and the level of detail in the environments is amazing! Secondly the idea of being dropped in an area and having to figure out how to successfully stalk and eliminate your target in a variety of different and creative ways sounds fascinating. Executing a perfect professional hit using stealth and ingenuity is an enticing prospect, appealing to the perfectionist in me, and the game looks to have excellent replay value in that regard.

Fans of the series thus far may go into this sequel with preconceived notions about how it’ll play and exactly what constitutes a Hitman game, so perhaps they may be more likely to be disappointed. However as a newcomer to the franchise, I’m excited to see what kind of trouble Agent 47 can get into and indeed how I can get him out of it.

Hitman Absolution is available from 20th November for PS3, Xbox 360 and PC.