The road to hell is paved with good intentions, and sand… lots and lots of sand…

Adrift in a sea of military shooters you’d be forgiven for being skeptical, or maybe even dismissing Yager’s Spec Ops: The Line as just another mindless war game. But despite its generic title and outward appearance, beneath its surface lies a harrowing tale that takes players on an emotional, psychological journey through the dark reality of war. Where there are no good choices and men are forced to act in the face of impossible circumstances and live with the consequences of their decisions.

Ravaged by the worst sandstorms ever recorded, the 33rd Battalion lead by Colonel John Konrad volunteer to assist in the evacuation and relief effort of the city. After being ordered to abandon its inhabitants to their fate shortly thereafter Konrad, along with his entire unit defy orders and remain to do what they can to help. As the storms intensify and Dubai is engulfed, communications are severed and the last message to come out of the tumault states that the 33rd are to lead a caravan of more than a thousand civilians out of the city…

That was six months ago and the evacuees never arrived. Enter protagonist Captain Martin Walker. Walker had served alongside Konrad, who had saved his life back in Kabul. He’s been ordered to covertly enter the dilapidated city along with two other Delta Operators – Lieutenant Alphanso Adams and Sergeant John Lugo – to find out what happened to the 33rd, help any survivors and ascertain the situation behind the storm wall. However what begins as a simple reconnaissance mission ends up hurling the squad into the midst of a conflict, where they’ll have to do the unthinkable in order to uncover the truth of what happened in Dubai. For the sake of spoilers I’ll stop there. This descent into madness is something you’ll want to experience for yourself…

Writer Walt Williams has cited the novel Heart of Darkness as his main inspiration for Spec Ops: The Line. Its poignant dark themes and mature narrative have been masterfully adapted to a modern setting and are mirrored throughout the experience.

At the core of the game lies its brutal decision making. Unlike many other releases there are no clear cut good or bad choices here; everything is made up of increasingly mirky shades of grey. Each action has repercussions and none of them are appealing and often after an outcome you’ll find yourself as well your team questioning your judgement. Consequences weigh heavily on you and the horror of what war truly entails will have you considering subject matter that other titles can only hint at.

Whereas a lot of modern shooters opt for a more washed out colour pallet, Spec Ops is bright and bold, employing a “post apocalipstick” look that really sets it apart. One of the first things you’ll notice about the game is how beautiful its environments are. Plush hotels, richly adorned in gold & crystal, huge crumbling skyscrapers that have begun to lean precariously and a mammoth sports arena full of military hardware are just some of the jaw-dropping locations you’ll visit during your travels through Dubai. The lighting and particle effects bring these settings to life spectacularly and although the entire game is essentially set in a desert wasteland, the scenery never gets dull. The title does an excellent job of variating both indoor and outdoor surroundings, changing up its colour schemes and alternating between night and day to keep everything feeling fresh. Punctuating the landscape is a plethora of striking politically charged graffiti that hauntingly illustrates the plight of the city’s disenfranchised refugees, giving you some insight into the cataclysm from an alternate perspective.

The game’s tone evolves with the mental and physical state of its characters who start off as professional, competent soldiers and deteriorate over time into haggard, broken survivors in the wake of the terrible events they experience. This transition is showcased in a couple of interesting ways. Firstly the incredibly detailed character models notably change, with items of clothing being ripped, dirt and sand covering their bodies and injuries becoming ever more present. Secondly their attitude and voice acting alters, going from succinct confirmation of orders to swearing, yelling and aggressive defiance as they become more and more disillusioned with the situation. 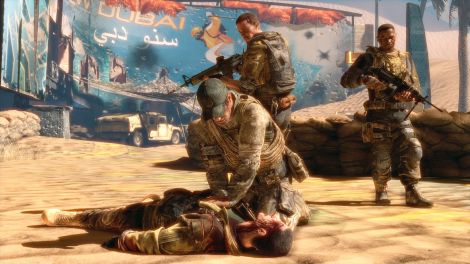 Speaking of voice acting, the performances and dialogue in the game are brilliant and thoroughly believable, serving to immerse you in the world and invest you in the game’s narrative and characters. The music on the other hand is a mixed bag. There’s an abundance of moody overdriven rock which is relatively dull and occasional psychedelic throwbacks to the music of the sixties, eluding to Spec Ops’ ties to Apocalypse Now, which are pretty cool, if a little on-the-nose.

For a title with such a nuanced narrative, its gameplay is fairly run-of-the-mill. Don’t get me wrong, Spec Ops is a competent cover-based shooter that fans of Gears of War will be right at home with, but in comparison to its richly woven story its playability doesn’t quite measure up. Both the guns you fire and the enemies you face are generally unremarkable, and the cover system is quite temperamental, which can be the cause of much frustration. Most of the time Walker will epically slide into cover or smoothly transition from one barrier to the next without a hitch, but occasionally these mechanics simply don’t work, leaving him standing there absurdly absorbing bullets. Due to the limited amount of health you (and your adversaries) posses, this will more than likely result in your death and a whole lot of swearing. The actual act of shooting feels slightly superficial, which is a shame, but when you connect with a headshot there’s a brief-yet-utterly satisfying moment of slow motion as a reward.

There are some interesting mechanics that break up the orthodox gameplay however, such as the ability to order your squad to attack high priority targets, give snipers a taste of their own medicine and flashbang your assailants. It would’ve been nice to be able to position them akin to Mass Effect, but nevertheless this component definitely adds some much welcome tactics to the gunplay. Sand can be used as a weapon. If you take out walls holding it back, it will come rushing through, crushing all in its path. Snipers plummet through glass floors if you shatter them and grenades kick up dust clouds, blinding foes and masking the battlefield for brief periods. Sunlight can get in your eyes and huge sandstorms will occasionally tear through environments, limiting your vision, decimating structures and rending orders to your squad inaudible. Brief stealth sections change up the gameplay and there are times where you’ll be separated from your squad, adding pressure by removing your safety net, forcing you to be totally self-reliant.

The main thing that lets the game down is its soulless, lacklustre multiplayer. Whereas the campaign is all about painful storytelling and emotion the multiplayer fails to innovate and does little to hold the player’s interest. As you’d expect there is a progression system, allowing your character to level up and unlock new weapons, gear and perks but it’s all fairly standard, which makes it hard to care. Spec Ops’ multiplayer is at its best in objective-based modes, the highlight of which is the Buried mode which tasks your team with attacking the enemies’ 3 bases, whilst defending your own. Relying on tactics and teamwork it creates an interesting ebb and flow to the conflict which is far more satisfying than the simple running and gunning of Deathmatches. Honestly there’s little else to say other than if you’re looking for a cover-based shooter with multiplayer in mind, I’d advise you to look elsewhere.

Though it’s not without problems, Spec Ops: The Line is definitely a strong single player experience. With its dark compelling narrative, stunning visuals and solid third-person gameplay it’s well worth you investing some time in. Not too much however as the campaign is only 6-8 hours long, which in my opinion is the perfect length for the tale that’s told here. Its pacing is rock-solid, driving the story forward and the performances from its cast are excellent. Unfortunately the unnecessary multiplayer brings the product down as a whole, but if you disregard it and focus on the campaign, then Spec Ops is a decent game that tries to do something different, which should always be applauded.